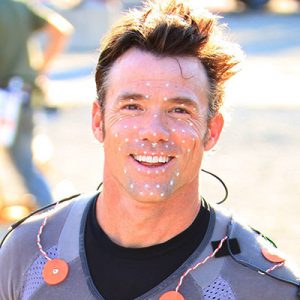 Terry Notary’s unique and impressive background combines the talents of an actor, stunt double, motion capture actor and movement coach. His first appearance as a performer was with  the word-renowned Cirque du Soleil, followed closely by his first job as a stunt movement coach on Dr. Seuss’ How the Grinch Stole Christmas. From there he went on to Tim Burton’s Planet of the Apes, and his first motion capture role in Avatar, where he was also the movement coach for the Na’vi.

Terry will next be seen in Avengers: Infinity War as Teen Groot and Cull Obsidian, The Lion King, and in Jungle Book: Origins. Other films in which he appeared and served as movement choreographer include The Hobbit trilogy, The Incredible Hulk, Rise of the Silver Surfer, The Adventures of Tintin, The BFG, Warcraft and Suicide Squad. Notary recently played the iconic character, Kong in Kong: Skull Island and also previously portrayed the alpha chimp Rocket in Rise of the Planet of the Apes, Dawn of the Planet of the Apes and War for the Planet of the Apes. Terry also worked as the stunt coordinator and movement choreographer for the Apes trilogy.

Through Terry’s seventeen year career, he has become an actor, director, creature performer, animal movement specialist, movement choreographer and stunt coordinator who has worked with the industry’s leading directors, including Ron Howard, James Cameron, Peter Jackson and Steven Spielberg. As a movement choreographer, Notary works extensively with cast to design and develop the signature character that is within a specific actor.

When not working in film, Terry enjoys teaching master class movement workshops around the world.

For more information on Terry…