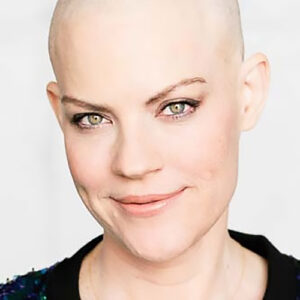 Actor Stephanie Czajkowski is best known for her roles as the violent alter-ego Hammerhead on HBO Max’s Doom Patrol, and stone-cold killer Bex Dawson on the reboot of MacGruber on NBC Peacock. You may have also seen her as the Post Master in Call of the Wild with Harrison Ford, or as Chrissy Metz’s supportive best friend Melissa in the heart aching drama, Breakthrough.

Stephanie’s first role was as a Paramedic on the TV series I Didn’t Know I was Pregnant, and has gone on to work on Bones, Shameless, Grey’s Anatomy, NCIS: LA, Jane the Virgin, How to Get Away with Murder, Supergirl and many, many more.

She was featured in the cinematic trailer “Betrayed” for Bioware’s “Star Wars: The Old Republic: Knights of the Eternal Throne” Expansion, which also used her as the model new official “face” of Senya Tirall. And you can hear her voice as the new narrator for the “Journey to the Stars” documentary at the Jet Propulsion Laboratory in Pasadena CA, joining such esteemed company as Sigournay Weaver, and Harrison Ford.

When not acting, Czajkowski is an advocate for breast cancer awareness through various charities and her podcast ChemoSkinny.

Originally from Wisconsin, Czajkowski earned a degree from the prestigious New York University Tisch School of The Arts and continued honing her craft at Playwright’s Horizon and Steppenwolf Theatre before moving to Los Angeles.

For more information on Stephanie…