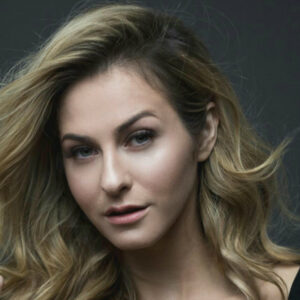 Scout Taylor-Compton began her acting career with a featured role in the A.F.I. film A.W.O.L starring David Morse. She went on to appear in many independent films, student films, and music videos before appearing in the leading role in MGM’s Sleepover. Since then Scout has appeared in many more films including 13 Going on 30,  Halloween and Halloween II, Get the Girl, Ghost House, and The Runaways.

On the small screen, Scout built a long list of credits after her first series pilot role in the Lifetime legal drama Class Actions, recurring roles on  Unfabulous,  The Guardian, Charmed, and Gilmore Girls, ER , Ally McBeal, That’s So Raven and several stints on The Tonight Show with Jay Leno.  Among many other titles, she has appeared in the crime dramas CIS: Crime Scene Investigation and NCIS: Los Angeles, Without a Trace, Bones, Breakout Kings, Grey’s Anatomy and more recurring roles in Nashville and Rosewood.

In 2004 Scout was nominated for a Young Artist Award for her work on Gilmore Girls, and in 2005 for her lead role in Sleepover and recurring role on CBS’s The Guardian. Her voice-over credits include a looping for Disney’s Sky High starring Kurt Russell and Kelly Preston. Other voice over credits include the films The Core starring Hilary Swank, I Am Sam starring Sean Penn, and The Princess Diaries 2: Royal Engagement. On stage she has played the title roles in the musicals Annie and the drama Anne Frank.

Scout lives in Los Angeles, CA and has completed work on several new film projects including Penance Lane, The Getaway Girls and most recently Starlight. She continues to train in acting, dance, and voice, enjoys writing songs, playing drums and surfing. She also enjoys participating in charity projects for disabled and disadvantaged children as a member of Kids With a Cause.

For more information on Scout…