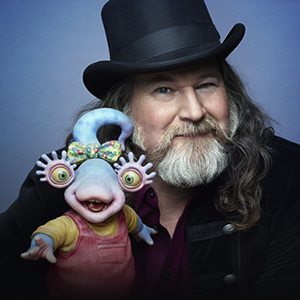 Kirk Thatcher has had a hand in creating creatures, writing and directing for many of pop culture’s most enduring fan favorite franchises including Star Wars, The Muppets and Star Trek. His work as a writer, producer and director has earned him an Emmy and two Webby awards.

Thatcher has a prolific relationship with Jim Henson Company productions that began in 1987, most notably writing Muppet Treasure Island, Jim Henson’s Turkey Hollow, along with episodes for Muppets Tonight and Dinosaurs. He directed It’s a Very Merry Muppet Christmas Movie, Muppets Letters to Santa, The Muppet’s Wizard of Oz (TV), as well as Turkey Hollow. Thatcher is a muppet designer and performer. His expertise came in handy when he appeared on Jim Henson’s Creature Shop Challenge.

During his time with George Lucas’ Industrial Light and Magic, Thatcher designed, built, and painted creatures for numerous projects including Star Wars: Return of the Jedi, Gremlins, E.T., Poltergeist, Star Trek II and Star Trek III. Thatcher has also worked on projects such as Gremlins 2, Muppets from Space, and Robocop 2. He directed Sid the Science Kid and Crank Yankers. Thatcher was an associate producer for Star Trek IV: The Voyage Home where he also had a rather memorable cameo.

For more information on Kirk…