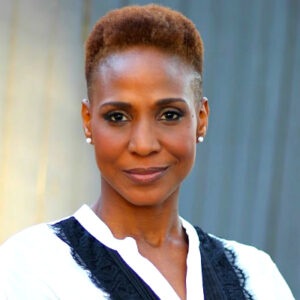 Karen Ceesay is an actor, writer & producer based in Atlanta, Georgia. She is best known for her roles as Mrs. Sinclair on Stranger Things, Nadine on Greenleaf, and Bertie from the Hilltop on AMC’s The Walking Dead. Other television credits include Black Lightning and The Gifted.

A lifelong theater enthusiast, Karen started performing at age ten, studying theater and dance at Freedom Theatre in her hometown of Philadelphia, Pennsylvania. Spelman College brought her to Atlanta where she graduated with a bachelor’s in theater arts. A respected and long standing member of Atlanta’s entertainment community, she frequently appears to speak on panels at events such as the Atlanta Film Festival, BronzeLens Film Festival, DragonCon, Arts Atlanta and many more.

Karen is an active member of Georgia Production Partnership (GPP), SAG/AFTRA and served on the Board of Directors for Women in Film & Television Atlanta (WIFTA) for several years, acting as co-chair of the chapter’s 40th Anniversary Gala. She currently lives in Atlanta with her chef husband and son, a budding director.

For more information about Karen…