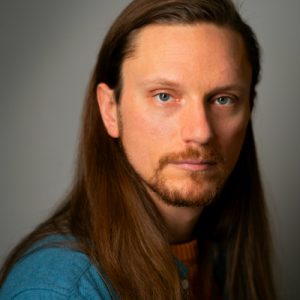 Josh Mikel, from Atlanta, GA, is best known for portraying Jared on AMC’s hit series The Walking Dead; seasons 7 & 8. Josh’s portrayal of the love-to-hate Jared earned him an appearance on The Talking Dead couch where he revealed he appeared as a walker in the season two finale before being cast on the show. When it comes to pushing buttons, Jared is the best at provoking those beholden to Negan and his army of Saviors.

Josh’s film and TV credits include the hired thug Colin in the hit comedy Game Night, Steven Conners in The CW’s Black Lightning, John Michael Paymon in the indie horror Last Shift, Armand in Independence Day: Resurgence, Raggedy Man in Stephen King’s Cell, as well as credits in The Vampire Diaries, Nashville, We’re The Millers, Dirty Grandpa, I, Tonya, and a bit role in Marvel’s Ant Man and the Wasp.

Josh is an actor, playwright, director, and musician from Conyers, GA. A graduate of Florida State University’s Theatre and Creative Writing programs, he honed his craft on the stage at FSU’s School of Theatre and developed a love for film and TV working on both sides of the camera with the acclaimed Florida State Film School. A published playwright, Josh is known particularly for his theatre for young audiences works, “The Monster Hunters,” and “Good Good Trouble on Bad Bad Island.”

As a director, he has created and animated music videos for the acts Against Me!, Waxahatchee, Jake Bugg, Neon Trees, and American Authors. Josh is the long time drummer for the indie rock band Look Mexico. He lives in Atlanta, Georgia where he is represented by J Pervis Talent.

For more information on Josh…