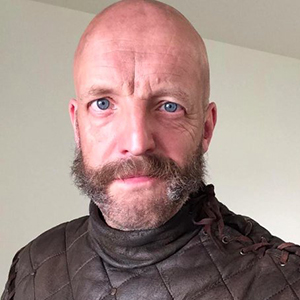 A bald guy crammed into a tuxedo drags a double bass onto the stage and half the audience worries they’ve entered the wrong show—this isn’t the comedy act they signed up for. Then Jim Tavaré rolls into his act, and they’re bowled over with laughter. It’s no wonder Tavaré is a fan-favorite and a regular at Hollywood’s Laugh Factory. He also boasts the title of the only overseas act to make it to the final five on Last Comic Standing.

His excellence on the comedy stage translates wonderfully to film. Tavaré’s portrayal of Tom the Inkeeper in Harry Potter and the Prisoner of Azkaban was an instant hit, what with his over-attentive, yet brash approach to caring for Harry after the young wizard accidentally blew up his uncle’s sister. Tavaré wrote and starred on the BAFTA Award-winning The Sketch Show. For Jim Tavaré Pictures Presents…, he wrote and starred in six short silent films, which aired on BBC2. Joining forces with Ricky Gervais, the pair wrote and appeared on the skit series The Jim Tavaré Show. On the Showtime dramedy Californication, Tavaré portrayed an English butler to a foul-mouthed music mogul played by RZA.

Tavaré has also appeared on True Nightmares, Tosh.0, Chuck, and Wings. His other film appearances include The Cursed Man and The Houses October Built, along with appearances in upcoming films such as I Spit on Your Grave: Déjà vu—a direct sequel to the classic horror film and The Magnificent Room.

For more information on Jim…