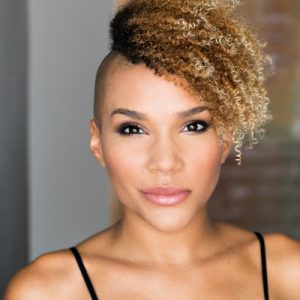 Emmy Raver-Lampman is an actress and singer known for her role as Allison Hargreeves in the hit Netflix series The Umbrella Academy.

Emmy was born and raised in Norfolk, Virginia. She attended Governor’s School for the Arts in Norfolk before moving to Marymount Manhattan College in New York where she graduated with a BA in Theater. Emmy’s career began on stage, she has performed in several Broadway and national touring productions including Hair, Jekyll & Hyde, A Night With Janis Joplin, Wicked and in 2015 she had an ensemble cast role in Hamilton. She left to take a lead role in the SpongeBob SquarePants musical in Chicago, but in 2017 she returned to Hamilton in a starring role, playing Angelica Schuyler in the first national tour of the production. In 2020 she starred in the independent feature Wednesdays opposite Seth Green & J Lee.

Emmy will once again reprise her role as Allison Hargreeves for the third season of The Umbrella Academy, currently filming in Toronto.

For more information on Emmy…