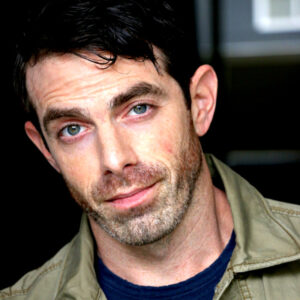 David Shae is an American actor known for his role as Alfred, one of the last remaining Highwaymen on AMC’s The Walking Dead, and also his early role as reporter Thom Etherton in HereTV’s The Lair.

He can also be seen starring in the 2019 reboot of Creepshow as the father of Cailey Fleming (aka Judith Grimes on The Walking Dead). Other credits include the Tyra Bank’s campy Christmas romp Life Size 2, the Netflix series The Haunting of Hill House, and AMC’s Lodge 49.

Currently, David is filming the 3rd installment of Marcus Dunstan’s Collector Franchise: The Coll3cted. Scheduled for release in 2020 is Richard Jewell,  directed by Clint Eastwood. He will also be seen in the films Bad Boys 3,  Glorias: Life on the Road, Gemini Man and MacGuyver. He will continue his role in season 10 of  The Walking Dead, and time will tell how the hot-headed rabble-rouser connects with the others.

David is a native of Rhode Island and is currently based in Atlanta, with his rescue pup Tess.

For more information about David…