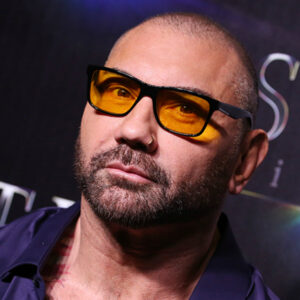 Dave Bautista stepped back into the space traveling role of Drax the Destroyer in the Marvel feature Guardians of the Galaxy, Volume 2. He first brought the beloved character to life in Guardians of the Galaxy in 2014, starring opposite Chris Pratt, Benicio Del Toro, Bradly Cooper, and Zoe Saldana. The film followed a ragtag group of characters on the run across the galaxy with a highly coveted object squaring off against a cosmic force of epic proportions. Dave also appeared on-screen in the much-anticipated Blade Runner 2049, the sequel to the science fiction cult classic Blade Runner directed by Dennis Villeneuve and co-written by Ridley Scott. He returned to the Marvel Universe again in Avengers: Endgame, and is slated to appear in the much-anticipated Guardians of the Galaxy 3 , written and directed by James Gunn,

Bautista appeared in the Sony feature Spectre, the 24th installment of the James Bond series. He starred opposite Daniel Craig, Christopher Waltz, and Lea Seydoux, Bautista played Hinx, a fast-driving, battle-hardened hit-man for the secretive terrorist cartel SPECTRE. Hinx had some of the most memorable scenes in the film, smashing 007 through walls during the film’s infamous train fight sequence and chasing him through Rome’s empty streets in a one of a kind Jaguar. He also starred in the action film Heist starring opposite Robert DeNiro and Jeffery Dean Morgan.

Dave can also be seen in the independent film Bushwick starring opposite Brittney Snow. The film centers on a war veteran and a young girl who must cross a treacherous five blocks in Brooklyn to escape an invading military force. Bautista stars in the independent film Warrior’s Gate, produced by Luc Besson. Warriors Gate follows a teenager who is magically transported to China and learns to convert his video game skills into those of a Kung Fu warrior.

A former professional wrestler and mixed martial artist, Bautista is best known for his time in World Wrestling Entertainment (WWE), where he was a six-time world champion and an international spokesman for the organization. In 2018 he appeared in WWE Smackdown Live and WWE Raw in 2019, before announcing his formal retirement from the WWE to focus on his acting career.

For more information on Dave…