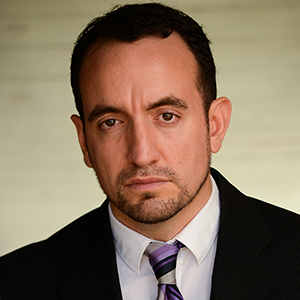 Carlos A. Navarro was born in New York but considers himself a true Orlando native. He is a family man with a beautiful wife and daughter who are his inspiration in every endeavor he pursues. He understands and values the importance of cherishing the special moments with them each and every day.

Carlos’ 19 year entertainment career spans multiple media forms including Radio, TV, Film, Video Games and Stand-Up Comedy. Carlos is the co host of the #1 morning talk show ‘Monsters in the Morning’ in Orlando and on I Heart radio. He is also an actor and has appeared on many different TV shows & Films. His recent acting work includes Commercials (Bud Light, Purina, Cash America, First Choice Hotels & Disney), TV Shows (Prison Break, Graceland, The Outsider, Bloodline) and the big screen (Identity Thief). He is probably best know for playing “Alvaro” on the hit AMC TV series The Walking Dead and the track suit wearing “Enrique” on the Disney+ series Hawkeye.

Carlos is a positive person who believes in living life to the fullest. So much so, in fact, he has created the motto ‘To the Top, Never Stop’!

For more information on Carlos…